Well, it looks like I didn't get my birthday wish. The Rockford abortion center can now...

The developing story of the Rockford abortion center that has been closed due to four... 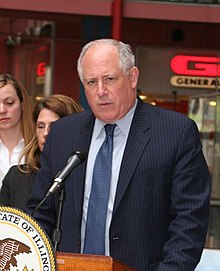 "The history of our race, and each individual's experience, are sown thick with evidence that a truth is not hard to kill and that a lie told well is immortal." - Mark Twain Personal PAC, the extreme pro-abortion political action committee, has asked Pat Quinn to present the "Pro-Choice Leadership Award" at their upcoming fundraiser. Pat Quinn, a self-professed "Catholic" has complied. When news of this reached Illinois' Catholic Bishops, they made no equivocations about what this means. Here is their statement:

I think this is great! People who publicly profess Catholicism (or any religion for that matter) should be held accountable in grave matters such as abortion. Quinn's life presents a distorted view of Catholicism to the public and it may well confuse Catholics and non-Catholics alike. Beyond Catholicism, we should all be doing this. Religious authorities, voters, interest groups, citizens and all who seek to advance the common good (religious or not) have an obligation to hold elected official accountable to protecting innocent human life. Your voice should be heard whenever a politician who represents you is standing against life! I don't mean this in the sense that you should just go vote against these politicians. I mean that your voice should be heard by them and by everyone around you. Because of the fact that "...a truth is not hard to kill and that a lie told well is immortal." In response to the Bishops' statement, Quinn commented with a lie well told. Your voice being heard can keep the truth alive and kill an immortal lie.
Read More

It is with great sadness that I write here again announcing the passing of a...

It is with great sadness that I write this post. Kortney Blythe Gordon and her pre-born...

The Northern Illinois Women’s Center in Rockford had it's license suspended by the Illinois Department...

This is pretty amazing...